4 stars in Downbeat and more

“Risky Notion,” my latest CD on the Origin Label, has been getting some great reviews, including a 4 star review in Downbeat magazine.

Here’s links to some others

“Risky Notion” – My New CD coming out in January 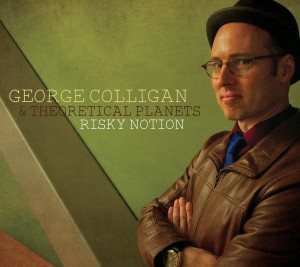 I’m really excited about my first CD as a drumming bandleader.

My new group, Theoretical Planets, has been a real source of musical satisfaction for me. Two tenors- Joe Manis and Nicole Glover, and bassist Jon Lakey, not to mention special guest trumpeter Tony Glausi, really made my music come alive. It’s coming out in late January- look out for it!

Click here to view the CD at Origin Records

Hey Everybody! Shout out to Matt Jorgensen for building me a new website. Looks much better, don’t you think? I will be updating the calendar as well as letting you know about upcoming recording and tours. Thanks, Matt!

There will be a 4 page article about your truly in Downbeat Magazine in March. Props to Michael J West for doing his research. It’s nice to be acknowledged, even at age 44!

One of the finer piano trio albums of 2013 — released too late in the year, or on too small a label, to make a dent in the critics’ polls — is George Colligan’s “The Endless Mysteries.” It’s a program of original compositions, most of them sensible and sturdy. And because it was recorded in a few hours with no rehearsal, it’s the product of rough-and-ready postbop expertise, rather than the lived experience of a steady band.

At least, not any band led by Mr. Colligan. A pianist of deep harmonic and rhythmic assurance, and sideman credits all over the map, he works here with the bassist Larry Grenadier and the drummer Jack DeJohnette. Each is a long-running member of another piano trio: Mr. Grenadier has been in both editions of the Brad Mehldau Trio, going back nearly 20 years; Mr. DeJohnette has spent the last 30 with Keith Jarrett.

Whatever the sum of all that experience is, Mr. Colligan made it work for him. Some of his pieces on “The Endless Mysteries” seem designed for these specific partners, especially Mr. DeJohnette, in whose band he has played. “Song for the Tarahumera,” a scrappy modal tune, becomes a roiling drum incantation. “Liam’s Lament,” a beautifully restrained ballad, features empathic rubato work by Mr. Grenadier. (It also features a theme played on melodica, an instrument that Mr. DeJohnette has favored on his own albums; I had to check to be sure that it was Mr. Colligan doing the playing.)

Mr. Colligan, who turns 44 next week, favors an earthy, assertive style, putting him in a lineage that includes McCoy Tyner, John Hicks and Mulgrew Miller. But he has other affinities, as he shows in a pair of spontaneous inventions provoked by the school shooting in Newtown, Conn., which claimed the daughter of a friend and sometime band mate. “Thoughts of Ana” is a softly chiming solo reflection, with a touch that brings Mr. Jarrett to mind; it leads into “Outrage,” which borrows a page from the Cecil Taylor playbook.

None of these moves feel calculated or rigid, because Mr. Colligan and his partners work so fluently. And while some titles sound like the sort of exhortations that Mr. Colligan might use with his students at Portland State University in Oregan — see “It’s Hard Work!” and “If the Mountain Was Smooth, You Couldn’t Climb It” — he doesn’t seem to be straining in the slightest. He’s past that point by now. NATE CHINEN

I have a new CD coming out on Sunnyside called Come Together featuring Boris Kozlov and Donald Edwards. Should be out September 22. Stay Tuned……

My new CD entitled RUNAWAY will be released on Sunnyside Records. I don’t know exactly when , but before the end of September. Stay Tuned!

Interview in All About Jazz

This interview by Paul Olsen is on the first page of the AAJ website.

Not only am I putting my new CD, Blood Pressure, On Itunes very soon, but I just noticed that my entire Steeplechase catalog is on iTunes now.

If you want to hear my early stuff, check it out.

It will be called The F Word: The Resurgence of Fusion. I thought the F word would get people’s attention. Also, I’ll be appearing at 1pm with Gary Thomas and Exile’s Gate, don’t miss that, either.