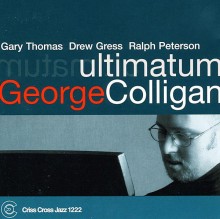 Pianist George Colligan has amassed a fairly sizable catalog on the Steeplechase and Fresh Sound New Talent labels. Ultimatum, however, is his first record for the Netherlands-based Criss Cross. The fiery quartet session features Drew Gress on bass, Ralph Peterson Jr. on drums, and the marvelous, underexposed Gary Thomas on tenor sax and flute. All have done highly advanced, groundbreaking work as leaders; they never stumble — indeed, they soar — on these enormously complex originals, nine in all. Colligan’s playing, as always, is fierce and remarkably consistent. Buoyed by Peterson’s relentless forward motion, he swings hard on the opening title track and the tempestuous “Shiva’s Dance.” He exudes warmth and introspection on the unusual ballads “Was It Not Meant to Be?” and “Wishful Thinking,” both of which feature Thomas’ incandescent flute. “Ancestral Wisdom,” “Catalyst,” and “Across…” generate a variety of rhythmic challenges for the group (the first is also a flute feature), while “Silkscreen” features the leader in an unaccompanied setting, where he always seems to shine (check out his Return to Copenhagen solo disc). Finally, “Lords of Justice” wraps up the session with a rock backbeat and an especially gut-wrenching tenor solo. A fine achievement by one of Colligan’s most powerful bands thus far. ~ David R. Adler, Rovi